Joe Biden doubled his coronavirus vaccinations target to 200m in his first 100 days in office as he used his first presidential press conference to claim progress against the pandemic and set the stage for new battles with Republicans over immigration, the economy and voting rights.

After waiting 64 days to formally meet with the White House press corps, the 78-year-old US president dismissed criticism that he mismanaged a increase in migrants crossing the southern border and said he intends to run for re-election in 2024.

In an indication of his determination to fight for the rest of his broad agenda, he sent his strongest signal yet that he supported changes to Senate rules that would make it easier to pass the legislation without Republican backing. .

“I’m a pretty practical guy. I want to get things done. I want them to be consistent with what we promised the American people, ”Biden said.

Help is here and hope is on the way

At the start of the press conference, Biden touted the recent passage of his $ 1.9 billion budget stimulus bill, saying he was already prompting forecasters to increase their growth estimates for this year to more than 6%.

“We are starting to see new signs of hope in our economy,” he said. “Help is here and hope is on the way.”

At the same time, Biden said his administration will aim to secure 200m coronavirus shots into America’s arms at the end of April, during his first 100 days in office, doubling his initial goal of 100 million vaccinations.

But despite Biden’s willingness to project his confidence into the health and economic crises that have dominated his tenure so far, he has found himself on the defensive due to an increase in the number of migrants arriving at the southern border with Mexico in recent weeks.

Pressed repeatedly on the matter by reporters, he replied that his predecessor Donald Trump had undermined the ability of the US government to deal with migrants and that much of the pressure at the border was seasonal.

“There is no easy answer,” he admitted.

However, Biden rejected the idea that more migrants were coming to the United States because he was a “good guy” compared to Trump.

Biden insisted that people wouldn’t want to take treacherous trips to a foreign country unless they feel hopeless or oppressed – citing his Irish ancestors as examples. “They left because of what the British were doing, they had real problems.”

He challenged Republicans to start negotiations on a comprehensive immigration reform bill, saying, “They have to stand for a while. They have to get it out of their system. But I am ready to work with any Republican who wants to improve the situation.

Biden’s press conference came as he continues to post relatively strong approval ratings given the polarized American political landscape. According to the latest poll average conducted by Realclearpolitics.com, 53.3% of Americans approve of his position as president and 42.3% disapprove.

Biden notched a big victory this month with the passage of the “American Rescue Plan” – the relief program that already distributes checks worth up to $ 1,400 to most Americans, as well as other supportive measures.

But the rest of Biden’s agenda remains evolving. He is expected to come up with a supplement next week. $ 3 billion in long-term spending in areas such as infrastructure, education and care provision – to be financed at least in part through tax increases.

“This is the place where we can dramatically increase American productivity – while still providing great jobs for people,” Biden said. “I want to change the paradigm [so] we reward work, not just wealth. “

He has also been under pressure to fully pass legislation passed by House Democrats to strengthen voting rights in response to growing restrictions on access to ballots pushed by Republicans in many states.

Passing such legislation would likely require a change in Senate rules, but Biden suggested this was essential given the scale of Republican efforts to crack down on voting rights. “What worries me is how this whole initiative is not American. That’s crazy. It’s sick, ”he said. 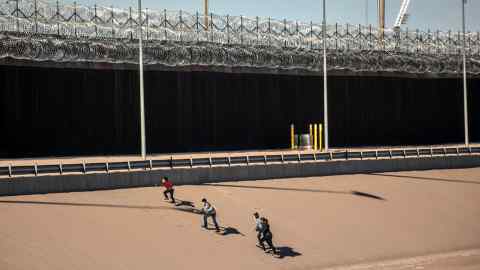 Foreign policy was not very present at the press conference, but Biden said he could not “imagine” the US troops remaining in Afghanistan next year, even if it extended the deadline from 1st. May to withdraw.

The president’s appearance came shortly before he addressed EU leaders by video conference. Biden suggested he would stress the importance of uniting democracies to confront autocracies around the world, including Russia and China.

“This is where I make sure we’re all on the same page,” he said. “I predict it to you: your children and grandchildren are going to do their doctoral thesis on the question of who succeeded, autocracy or democracy. Because that’s what’s at stake here. “

This Father’s Day, Shop for Smartphones and Appliances and Get Free Gift Voucher up to Rs. 1,000 on Bajaj Finserv EMI Store

This Father’s Day, Shop for Smartphones and Appliances and Get Free Gift Voucher up to Rs. 1,000 on Bajaj Finserv EMI Store